All images are the property of respective owners and no permission is provided for duplication.

A consideration from Rethinking Nature in Contemporary Japan: From Tradition to Modernity 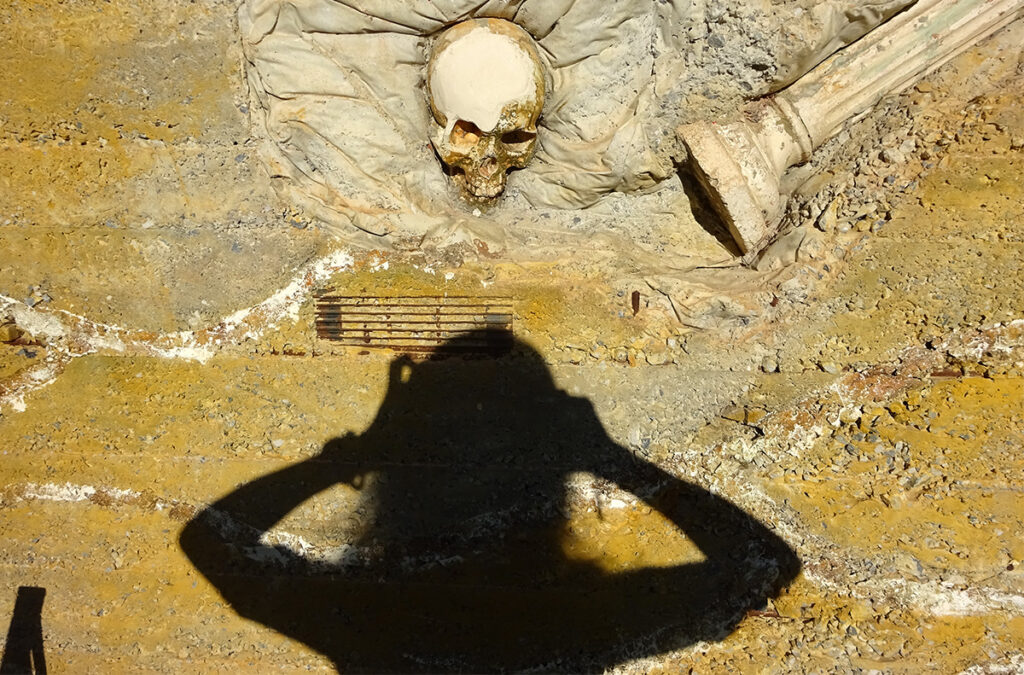 Dōgen and His View of Nature

The considerations on natural phenomena depend in large part on the conception of Enlightenment and its acquisition. Where the whole universe is intended as the realm of buddhahood, or of Buddha-nature, any element of the universe be it animate or inanimate, having a mind or not, is advancing towards buddhahood naturally.

Both Shingon and Tendai schools shared the view that Buddha-nature is a permanent and eternal substance pervading the universe, immanent in all phenomena, and that beings will attain buddhahood earlier or later by virtue of its possession.

However, at the dawn of the 13th century in Japan, Dōgen introduced a drastic change to this view elaborating a very original conception of buddhahood and, consequently, stimulating a fresh and radical approach to inanimate nature.

For Dōgen, the difference between animate and inanimate is completely rejected since both are equally Buddha-nature, and since the whole universe is originally enlightened. Again in the same chapter, he says “therefore, mountains, rivers and the great land all are the ‘Ocean of Buddha-nature’”. And a few lines after, “things being like that, to see mountains and rivers is to see Buddha-nature, to see Buddha-nature is to see a donkey’s jaw and a horse’s mouth” (Etō 1986, 3: 319).

Dōgen is unique in Japanese Buddhism for urging to learn buddhahood from nature. He believes that since natural phenomena are the realisation of buddhahood, we can learn from them how to realise ourselves. As a matter of fact, he is convinced that the problem of man is the illusion of his ego. When the individual ego is dropped, the true aspect of reality will be manifested. The natural phenomena being without mind, and without ego, are therefore the true aspect of reality: they are the body of Buddha.

The colours of the mountains
the echo of the valleys.
Each one as it is
is the voice and the form
of my Shakyamuni.
(Ōkubo 1970, 411)

He is not saying that nature, mountain and valleys, or else, reminds him of Shakyamuni, or that they manifest Buddha-nature. Rather, he says that they are Buddha-nature, just as they are.

Nature – with its impermanence, mutability, the passing of the seasons,life and death – is the realm of religion; in a sense, it is sacred because it is the full realisation of Enlightenment. Therefore, Dōgen does not give nature human sentiments: its caducity is not to be lamented, as other poets do; instead, he just describes nature’s Enlightenment.

Nature can transmit its teaching to man: of course, using its own communicative tools, which are not words, still, nature has the ability to teach Enlightenment to those who are able to understand its language.

In spring the flowers
In summer the cuckoo
Autumn with the moon
Winter with snow is clear
And cold.
(Ōkubo 1970, 412)

According to Dōgen, nature being ‘just as it is’, without a deluded mind and without defilements is, ‘just as it is’, the realm of the realised Enlightenment from which we can learn and have guidance, whether we are able to listen to its voice or not.

Two chapters in Shōbōgenzō, in particular, are centred on the description of nature and its manifestation of Enlightenment: “Sansuikyō” (The sūtra of Mountains and Streams) and “Keisei sanshoku” (Sound of the Stream, Form of the Mountain). In “Sansuikyō”, Dōgen describes nature as the realm of liberation and realisation:

These mountains and waters of the present are the expression of the old buddhas. Each, abiding in its own dharma state, fulfills exhaustive virtues.
[…] they are liberated in their actual occurrence. (Etō 1986, 1: 217)

And he insists on eliminating any distinction between man and nature: “the blue mountains are not sentient; they are not insentient. We ourselves are not sentient; we are not insentient” (Etō 1986, 1: 218), the whole universe is the land of realisation, without separation and any single phenomenon is manifesting buddhahood: “incalculable buddha lands are realized even within a single drop of water” (Etō 1986, 1: 224).

In “Keisei sanshoku” again he stresses the fact that human beings and nature belong to the same buddha-nature and reach together Enlightenment “because of the virtues of the stream sound and mountain form, ‘the earth and sentient beings simultaneously achieve the way’” (Etō 1986, 1: 139). 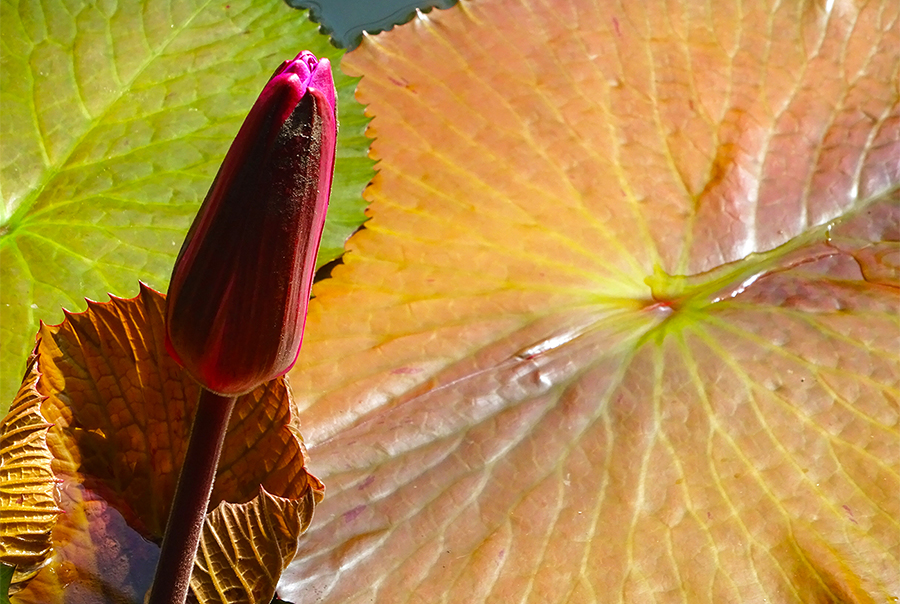 Join Ivette Ebaen, Miksang practitioner and teacher, for the first in a series of online Miksang foundational courses hosted by the Philadelphia Shambhala Center. Learn to ground yourself in a still and quiet mind that prepares you for a deeper meditation, seeing the world afresh, perceived through the eyes of Miksang.

Not to be confused with the usual run-of-the-mill photography courses, Miksang is a contemplative photography practice based on the teachings of Chögyam Trungpa Rinpoché. In the process of photographing color, texture, pattern, light and shadow; space and dot-in-space, we’ll experience what Rinpoché called the flash of perception – little glimpses of enlightenment. Recognizing them, we’ll deepen our trust in what we perceive, and allow awareness to inspire our pictures.

“You might ask why we speak of beauty: The answer is that beauty here means fullness, totality–total experience. Our life is completely full even though we might be completely bored. Boredom creates aloneness and sadness, which are also beautiful. Beauty in this sense is the total experience of things as they are. It is very realistic. It means that we can’t cheat ourselves–or anybody else…” -Chögyam Trungpa Rinpoché. 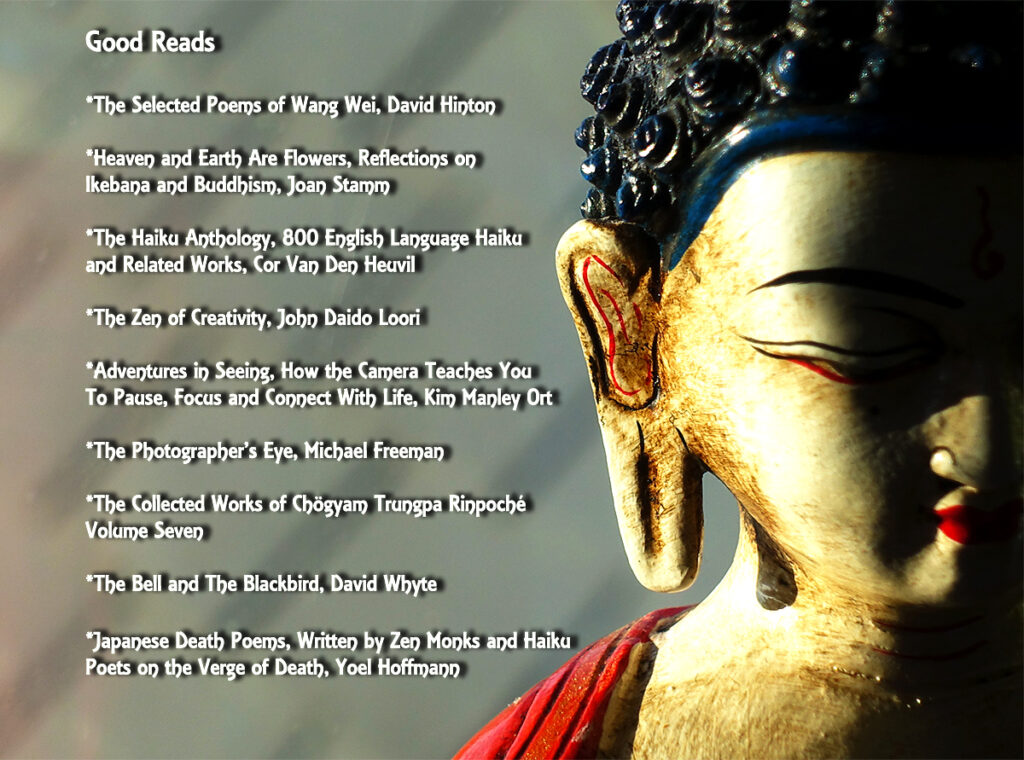 Haiku Master Michio Nakahara talks about the art form Shahai or photo haiku and how the two work and complement each other.